People who knew Father McGivney during his time of founding the Knights of Columbus were impressed and drawn to his energy and intensity. Father Gordian Daley later recalled, “I saw him but once, and yet I remember this pale, beautiful face as if I saw it only yesterday. It was a ‘priest’s face’ and that explains everything. It was a face of wonderful repose. There was nothing harsh in that countenance although there was everything that was strong.”

William Geary, one of the Order’s charter members, said that at the first council meeting in 1882, Father McGivney was “Acclaimed as founder by 24 men with hearts full of joy and thanksgiving; recognizing that without his optimism, his will to succeed, his counsel and advice they would have failed.”

Father McGivney had originally suggested Sons of Columbus as a name for the Order. This would bind Catholicism and Americanism together through the faith and bold vision of the New World’s discoverer. However, the word “knights” replaced “sons” because key members of the organizing group who were Irish-born Civil War veterans felt it would help to apply a noble ritual in support of the emerging cause of Catholic civil liberty. 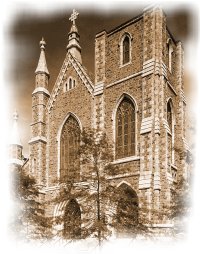 The first public references to the Order came on February 8, 1882.  Both the New Haven Morning Journal and the New Haven Courier reported that the Knights of Columbus had held an initial meeting the night before.

On March 29, the Connecticut legislature granted a charter to the Knights of Columbus, formally establishing it as a legal corporation. The Order’s principles in 1882 were “unity” and “charity.” The concepts of “fraternity” and “patriotism” were added later. Each of these ideals played a major role in ceremonials from the beginning. The Columbus-linked themes, says historian Christopher J. Kauffman, “reverberated with pride in the American promise of liberty, equality and opportunity.”

Add Knights of Columbus - Council 16561 to your home screen!